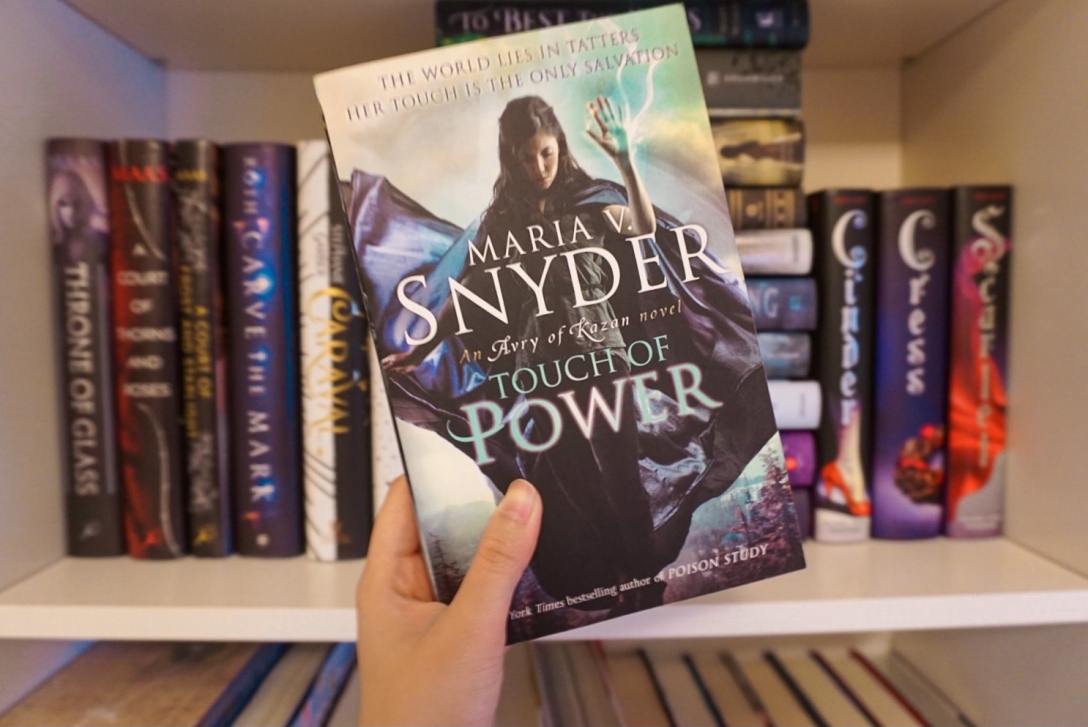 Fantasy is always a hit-or-miss genre for me. There are some days where I will go on a full “fantasy books only!!” binge, and then other days where I completely loose interest in the genre as a whole and end up not reading a single fantasy book in year. After reading, Shadow and Bone by Leigh Bardugo, I was itching for anothe YA Fantasy book to keep this hype up and found ‘Power of Touch’ sitting on my shelf.

Laying hands upon the injured and dying, Avry of Kazan assumes their wounds and diseases into herself. But rather than being honoured for her skills, she is hunted. Healers like Avry are accused of spreading the plague that has decimated the Territories, leaving the survivors in a state of chaos.

Stressed and tired from hiding, Avry is abducted by a band of rogues who, shockingly, value her gift above the golden bounty offered for her capture. Their leader an enigmatic captor-protector with powers of his own is unequivocal in his demands: Avry must heal a plague-stricken prince, the leader of a campaign against her people.

As they traverse the daunting Nine Mountains, beset by mercenaries and magical dangers, Avry must decide who is worth healing and what is worth dying for.

I have been wanting to read a fantasy book that incorporates some elements of magic in it. ‘Touch of Power’ has been on my TBR shelf for quite sometime now, and after reading the synopsis on Goodreads, I decided then and there that it was going to be my next read. This book is a Young Adult fantasy novel about Avry, one of the last few healers in their world. She also has the entire town hunting her for that reward on over her head. When she gets kidnapped by a group of rogues with the intent to use her to heal a sick Prince, Avry begins to explore the strength and limits to her powers.

The world building was good, and by the end of the books you get a fair idea of the world that the author was trying to create. There are carvens, magicians, princes and “Bad Lilies”. It was also repeatedly pointed out that magicians are a dying race, but despite that fact, it seems like every single character we run across is some sort of magician. Very rare, they said.

However, one thing that I had a hard time keeping up with was how the realms worked. I suspect that this will become clearer in the next books in the series— at least I hope it does. Now let’s talk about magic. Avry has the ability to heal people. She does this by transferring whatever pain someone is feeling, and absorbing it herself. She has the burden of suffering the pain for others, and then after a few days she’ll eventually recover. Unfortunately, she cannot heal the dead— as we so tragically come to realise.

The love story in this book was interesting. It did not start off with the ‘insta-love’ trope— which is a good thing. Kendrick and Avry are full of banter and sarcasm at first and I though it was cute. I would also like to point out the fact that Avry does share that his scent is like “nature and sunshine” (whatever that smells like). However, one thing that I absolute could not get over was the fact that Kendrick “backhanded [her] on the cheek” when Avry told him she will not heal the prince. His desperation for the Prince to be healed is explained further on, but in my opinion it does not render a slap on the cheek. To be clear Kendrick does apologise later on, but was hitting her necessary— NO IT WAS NOT.

Their love story does develop later on (shocker!) but I feel like it was a bit rushed towards the end. The first kiss Avry and Kristen share was not relished or turned into a special little moment because it happened out of nowhere and then pushed aside. As for the other characters, they were quite under developed in my opinion. The only other character that I could remember besides Flea is Ben, the other two are quite forgettable and seemed to fade in the background.

Spoilers: Even though we did not get to learn much about him, Flea was starting to become one of my favourite characters in the books so I was kind of sad when he died. I’m guessing the author probably wanted his death to be emotional, however the way the other characters handled his death was quite disappointing, they kind of accepted it too quickly and moved on— in other words, it wasn’t as emotional as I would have liked it to be. That being said, I thought the part where Ben gave Avery Flea’s juggling rocks with all their names on was so sweet. At least they continued to honour Flea in some way.

Then we have Tahon, who is our villain. And boy, oh boy was he a villain. First of all his plan to take over all the realms and make everyone his solider is messed up. But then he also forces himself on Avry.

Yes, you heard that right.

Tahon apparently has the power of manipulating people’s emotions and feelings by touch alone. There are scenes where he would kiss Avry, and she would be confused at first, but then ultimately succumb to his advances because of the literal power he has over her. First of all there was no consent and therefore that is sexual harassment; and second of all, that is disgusting and I physically felt repulsed while reading those scenes. This douche bag had to use his power to get a girl to kiss him back. There was even a scene were he basically forces her to wear a very revealing dress that she was uncomfortable with.

If I had to choose between Tahon or Kendrick I would choose to jump off a cliff instead.

Believe me when I say I was so excited for this book when I read the synopsis. The initial idea of the plot was so good, but in my opinion it could have been executed better. I will admit, I did genuinely enjoy some parts of the book— namely the world building and the interactions between Avry and the team, but then there are other parts that made me pause and turn to look at my imaginary camera in disappointment.

That being said, I would still encourage you to check this book out if you think you might enjoy it. I am not giving up on this series, and I do plan on checking out the next books in this series sometime in the future. Hopefully.

Have you read ‘Touch of Power’ by Maria Snyder or any of her other books? Let me know what you thought of them in the comments below!

View all posts by Alyssa

My Tweets
novelstorian's ReaderRank
novelstorian has reviewed 122 books with an average rating of 3.385 out of 5.
332 people have found novelstorian's written reviews to be helpful on Goodreads.
See more...

Top 50% based on reading volume

Top 50% in books from large presses

Search What You’re Looking For